After 28 years as Architectural Historian at M-NCPPC, Clare Lise Kelly is retiring. Property owners, researchers, planners, Modernists, and others will use her thorough, insightful, and award-winning work products for decades to come. Thank you, Clare, for leading so many of us into the Montgomery Modern era ! 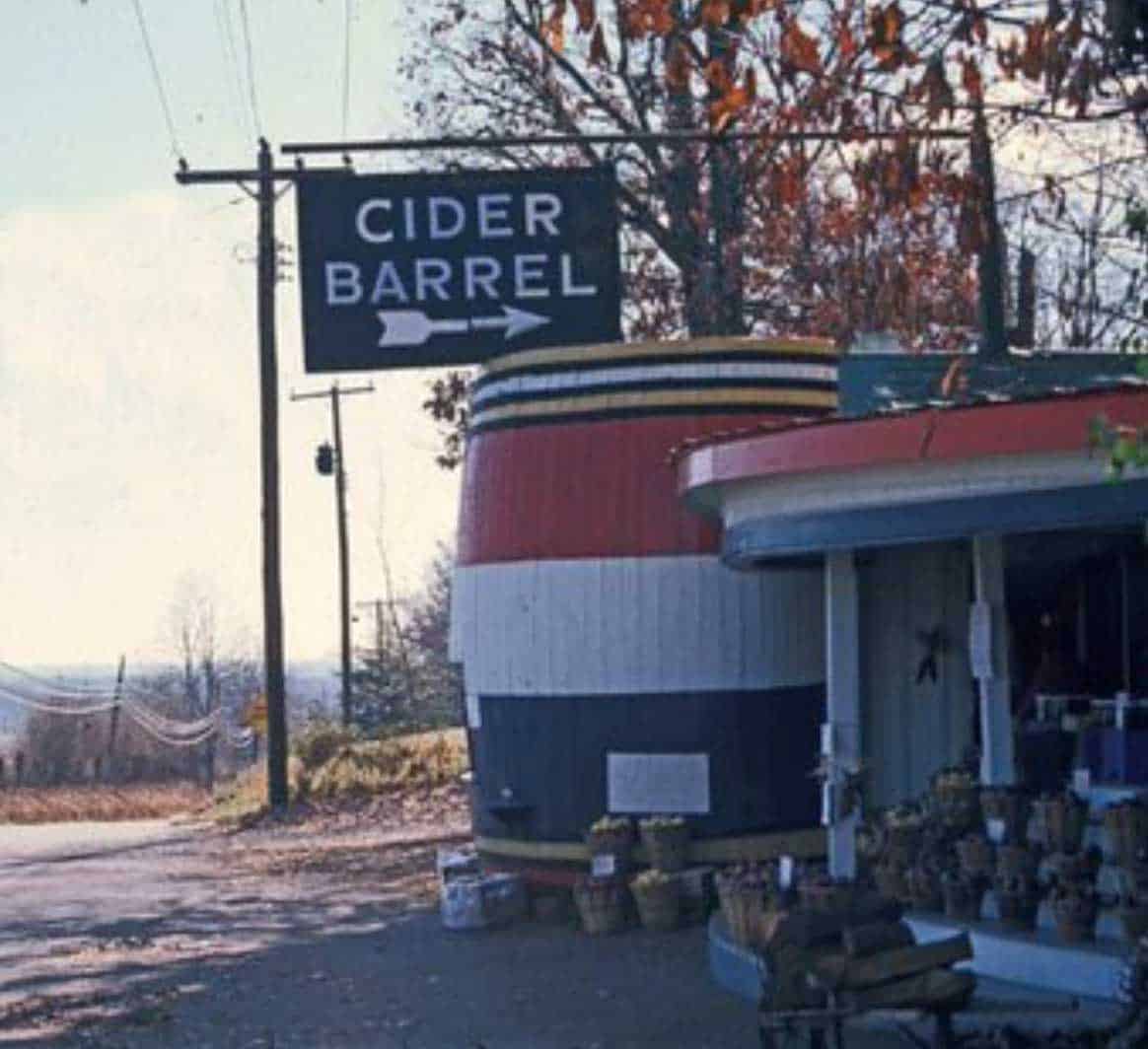 A local pastry chef hopes to restore the Cider Barrel on MD Route 355 to a new use as a bakery. Vacant since 2003, this red, white, and blue local icon needs everyone’s help to return to nourish and enliven residents and travelers again. Brandi Edinger wants to raise $80,000 by October 7 to begin repairs and solid plans to reopen business here.

A Germantown landmark since much of the surrounding area was still farmland, the Cider Barrel now stands empty next to an apartment complex along MD Route 355. The once-popular stop for apple cider—a barrel-shaped building painted red, white and blue—closed in 2003, but a local pastry chef is hoping to lease and restore the building and reopen it as a bakery.

“I keep seeing the Cider Barrel every time I pass by, and I think, it’s such a beautiful building, how come no one’s done anything with it?,” Brandi Edinger stated.

“I’m going to take a shot in the dark with it.”

She got the okay from the property owner and later earned the backing of the Germantown Alliance and the Germantown Historical Society. Edinger launched a Kickstarter online fundraising account this summer for donations to open the Cider Barrel as a new business. She plans to lease the building from Elm Street Development, which owns the adjacent apartments and currently maintains the Cider Barrel.

As the Cider Barrel Bakery, the shop would sell fresh pastries, including croissants, Danishes and cinnamon rolls, Edinger said. If her plans work out, she said she would also partner with local farms to sell produce, flowers and other seasonal items.

Edinger wants to raise $80,000 by Oct. 7 to restore the building’s foundation, saying the structure “needs a lot of work.” Since it is a Kickstarter campaign, she will only be able to keep the money if she meets her goal.  She hopes residents will support the project out of interest in seeing the Cider Barrel in use again and that a grant might be available.

When he built the Cider Barrel in 1922, owner Andrew Baker used it to sell products from his nearby apple orchard. Throughout Prohibition, Baker advertised his “glorious temperance treat” for sale at his novelty roadside stand. The Norton-Cross family bought the building in the 1930s and sold cider there for nearly 80 years. The Cider Barrel was designated a historic site in 1989.

In a letter to the Montgomery County Historic Preservation Commission this spring, Germantown Alliance president Susan Burkinshaw praised the project as a “great use” of a historic space. “The Cider Barrel is an important part of Germantown’s history and it is a shame to see it vacant,” she wrote. “The proposed pastry shop would be a fantastic addition to the community.”

Edinger, who lives down the street from the Cider Barrel, said she appreciates the history of the site and plans to “represent the Cider Barrel for what it was.” She will not change the exterior of the building and will furnish one room with historic photos and information.

A pastry chef in the area for 12 years, Edinger was trained in Europe. She said she would primarily focus on baked goods at the new Cider Barrel, also offer baking classes to kids inside and perhaps sell ice cream from the streetside window. Of course, she would sell cider, too.

This summer saw the relocation of two local historic landmarks. Both are designated historic sites that have been moved once before. Each proposed relocation became an object of considerable public controversy, and both landmarks will suffer reduction in interpretation and appreciation with the change of their traditional environments.

Montgomery County’s Confederate Soldier Monument, a prominent feature of Courthouse Square in Rockville since 1913, came to greater public attention in the summer of 2015 after the Charleston, SC murders. Despite protestations and offers for additional on-site interpretation, the County Executive embarked on a two-year path to move the statue off County land, meanwhile protecting it from further vandalism. Over the weekend of July 22-23, the bronze statue and its stone base were moved to private property at White’s Ferry near the Potomac River in Dickerson. Plans are underway for it to be part of broader interpretation. For recent comments by the National Trust for Historic Preservation on this general topic, see savingplaces.org

Wilson’s Store, better known as Community Paint and Hardware, is a reminder of Bethesda’s pre-WWII status and appearance as a small town on a major roadway. Overnight on August 19-20, soon after a ruling by a Circuit Court judge, the 1890s store was cut in half to prepare for its move to a parking lot on Middleton Lane. The move makes way for Carr Properties to redevelop the former Apex building site on Wisconsin Avenue into a three-tower structure with 480 residential units and for the future Purple Line to be built underneath.

read more
Recent Posts
Archives
Follow us
Get our Newsletter
© 2020 - Montgomery Preservation Inc. - All Rights Reserved
Back To Top